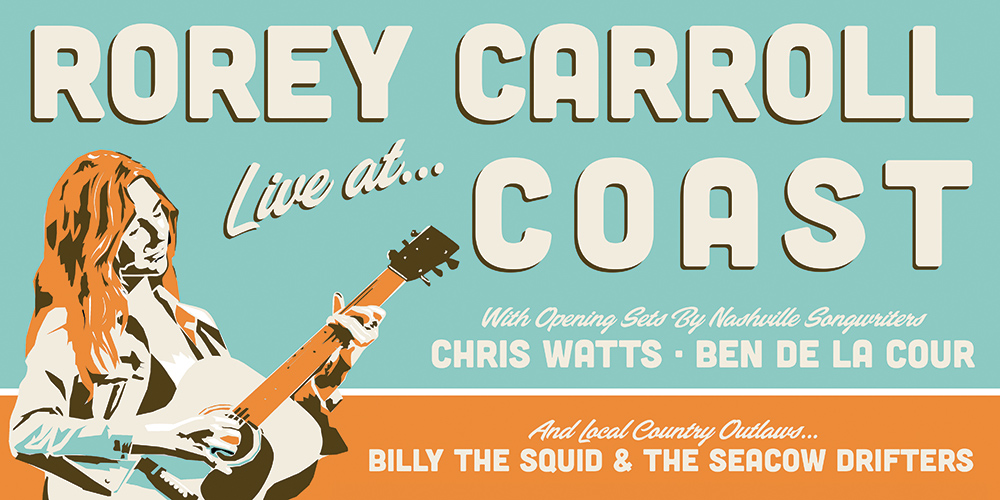 Nashville’s Rorey Carroll began making a big a name for herself from coast to “COAST” in 2016. And she’s headed back to Key West in late February after crowds fell in love with her a few months back.

In early November, the rising star in the folk and Americana music scene took the stage at our place for short sets as an opening act for the two sold-out Todd Snider concerts. Snider, a proverbial folk legend, has taken it upon himself to mentor the young singer—just as John Prine had done for him early on in his own career. And the relationship seems to be working.

Carroll ended 2016 with Rolling Stone magazine featuring her second album, “Love Is An Outlaw” as one of the top 15 country and Americana albums “you’ve never heard but should” while High Times magazine called her “Outlaw Folk’s newest star”.

When asked about her coming back so soon after her last appearance, COAST founder Billy Kearins said, “when Rorey took the stage back in November the crowd fell in love with her at first sight. Beyond the voice and songs, she, much like Todd, is a master of storytelling and she really captured the audience from the opening chord.”

He added, “in the days that followed those two concerts, we had just as many people praise Rorey as they did Todd, so we re-connected with her and she was really excited to get back down here to play at the end of the road.”

The concert is February 25 at COAST on Stock Island. Doors open at 5pm and the evening will start with local outlaws Billy the Squid and the Seacow Drifters, followed by sets from Nashville songwriters Chris Watts and Ben de la Cour. Rorey should be taking the stage at 9pm.

As with all shows at COAST, it is expected to sell out ahead of time and tickets can be purchased at in our online store.